Instructions for human use of the drug Vagimilt®

FORM OF THE DRUG: 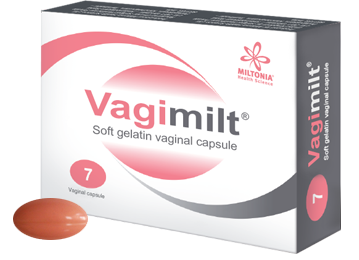 PHARMACODYNAMIC PROPERTIES: drug has properties inherent to the individual components of the drug.
Clindamycin – an antibiotic from lincosamides group. It is active against major pathogens of bacterial vaginosis: Gardnerella vaginalis, Mobiluncus mulieris, Mobiluncus curtisii, Bacteroides spp., Mycoplasma hominis, Peptostreptococcus spp, inhibits protein synthesis in bacteria by binding to the 50S-ribosomal subunits.
Clotrimazole – Clotrimazole – antifungal ingredient from imidazole derivatives group; it has broad spectrum of action and eradicates growth of yeasts. Clotrimazole is used for topical application. The spectrum of action of clotrimazole includes dermatophytes, yeasts, Gram-positive (Staphylococcus, Streptococcus) and gram-negative bacteria (Bacteroides spp., Gardnerella vaginalis), and Trichomonas vaginalis, Malassezia furfur, Corynebacterium minutissium. Antifungal effect is associated with impaired synthesis of ergosterine and fungal cell membrane. Fungistatic or fungicidal activity depends on the type of microbe strains.
Pharmacokinetic properties: after intravaginal administration of Vagimilt® Vaginal capsule once daily there is systemic absorption of 3 to 30 % of 100 mg Clindamycin and 5 to 10% of 100mg of Clotrimazole are absorbed into the body. Absorbed substances are metabolized in the liver and excreted with the bile.

Basic physical and chemical properties: soft gelatin opaque capsules of pink color, have oval shape, containing white to rose oily mass.
Incompatibility: possible antagonistic interaction between clindamycin and erythromycin, while intravaginal administration clotrimazole reduces the activity of amphotericin B and other polyene antibiotics. While simultaneous administration with nystatin, the activity of clotrimazole may be reduced. The preparation contains components which can reduce the strength of products made from latex or rubber, such as a condom or a vaginal contraceptive diaphragm. Therefore, administration of such products during treatment is not recommended.

bacterial vaginosis and other gynecological infections caused by bacteria and fungi susceptible to the drug. Disinfection of the genital tract before gynecological procedures.

hypersensitivity to the drug.
Pregnancy and lactation: ВIn the first trimester administration of drug is not recommended. Clinical and experimental studies have not shown that vaginal administration of clindamycin and clotrimazole during the second and third trimester of pregnancy negatively affects the health of the woman or the fetus. Data on the penetration of the Vagimilt® in breast milk is not available. Therefore, the drug is used only after careful assessment of the benefit for women / risk to the fetus (baby), which is determined by the doctor, strictly adhering to the recommended doses.
Children: not applicable.
Ability to influence the reaction rate when driving or operating other machines: does not influence.

intravaginal administration. In the lying position to introduce the Vagimilt® capsule as deeply as possible into the vagina. Treatment should not be carried during menstruation period.
Treatment of bacterial vaginosis and other gynecological infections: one capsule per day during 7 consecutive days, before going to bed.
Prevention before gynecological procedures: one capsule once a day for three days before the scheduled procedure, and four days after.

due to the low absorption of the drug overdose is unlikely.
If you accidentally took the drug orally, the following symptoms are possible: anorexia, nausea, vomiting, gastralgia, abnormal liver function;
rarely – drowsiness, hallucinations, polakiuriya, allergic skin reactions. In such cases, oral administration of activated charcoal is required.

INTERACTION WITH OTHER DRUGS AND OTHER INTERACTIONS:

antagonistic interaction between clindamycin and erythromycin, while intravaginal administration of clotrimazole reduces the activity of amphotericin B and other polyene antibiotics.
Vagimilt® contains components which can reduce the strength of products made from latex or rubber, such as a condom or a vaginal contraceptive diaphragm. Therefore, administration of such products during treatment with Vagimilt® is not recommended.

Vagimilt® is not recommended for use during menstruation. If while administration of the drug Vagimilt® severe or prolonged diarrhea has appeared, the drug should be stopped and appropriate diagnostic procedures should be made and, if necessary, treatment should be prescribed.
During therapy with Vagimilt® you should not engage into vaginal intercourse, or use other drugs with intravaginal administration.

2 years. Do not use the drug after date of expiry indicated on the packing.

Store at temperature not exceeding 25°C , out of reach of children.